When the Federal Accountability Act received Royal Assent on December 12, 2006, the Office of the Privacy Commissioner (OPC) was added to the Schedule of the Privacy Act along with other Agents of Parliament. Therefore, while not initially subject to the Act, the OPC became so on April 1, 2007.

Section 72 of the Act requires that the head of every federal government institution submit an annual report to Parliament on the administration of the Act within their institutions during the fiscal year.

The OPC is pleased to submit its twelfth Annual Report which describes how we fulfilled our responsibilities under the Privacy Act in 2018-2019.

The mandate of the OPC is to oversee compliance with both the PA, which covers the personal information handling practices of federal government departments and agencies, and the Personal Information Protection and Electronic Documents Act (PIPEDA), Canada’s private sector privacy law.

The OPC’s mission is to protect and promote the privacy rights of individuals.

For matters relating to personal information in the private sector, the Commissioner may investigate complaints under section 11 of PIPEDA except in the provinces that have adopted substantially similar privacy legislation, namely Quebec, British Columbia, and Alberta. Ontario, New Brunswick and Newfoundland and Labrador now fall into this category with respect to personal health information held by health information custodians under their health sector privacy laws. However, even in those provinces with substantially similar legislation, and elsewhere in Canada, PIPEDA continues to apply to personal information collected, used or disclosed by all federal works, undertakings and businesses, including personal information about their employees. PIPEDA also applies to all personal data that flows across provincial or national borders, in the course of commercial activities.

The Commissioner focuses on resolving complaints through negotiation and persuasion, using mediation and conciliation if appropriate. However, if voluntary cooperation is not forthcoming, the Commissioner has the power to summon witnesses, administer oaths and compel the production of evidence. In cases that remain unresolved, particularly under PIPEDA, the complainant or the Commissioner may take the matter to Federal Court and seek a court order to rectify the situation.

As a public advocate for the privacy rights of Canadians, the Commissioner carries out the following activities:

The Privacy Commissioner is an Officer of Parliament who reports directly to the House of Commons and the Senate. The Commissioner may be assisted by Assistant Commissioners, who have delegated responsibilities under both the PA and PIPEDA.

In 2018, the OPC, following an organizational review, adopted a new structure to support the Privacy Commissioner’s vision to be more proactive, and to focus efforts where there can be an impact for the greatest number of Canadians.

The core responsibility of the OPC is the protection of privacy rights of Canadians. To do this, the OPC’s work falls into two program areas — Compliance and Promotion. Both areas are important in protecting privacy.

The OPC is structured in the following way:

The Compliance Program, headed by the Deputy Commissioner, Compliance, focuses on addressing existing privacy compliance problems through a variety of enforcement activities to ensure violations of the law are identified and that remedies are recommended. This includes investigations into complaints filed by Canadians, but also a shift towards more proactive enforcement, such as proactive, Commissioner-initiated investigations or, in certain cases, audits, to review issues that aren’t being addressed through the complaint system.

The PA Compliance Directorate investigates complaints under the Privacy Act from individuals who believe they have not been given access to their personal information held by government institutions, or feel that their information has been inappropriately, collected, used, disclosed or managed. The Directorate also investigates complaints and conducts audits that are initiated by the Commissioner.

The Compliance, Intake and Resolution Directorate is a new directorate within the Compliance Sector. It is responsible for receiving and quickly resolving complaints received under the PIPEDA and the Privacy Act. The Directorate also:

The Promotion Program, headed by the Deputy Commissioner, Policy and Promotion, Policy and Promotion, is forward-looking and aims to inform Canadians of their rights and how to exercise them, and to bring organizations into compliance with the law. This involves, for example, the development and promotion of general—yet practical—information and guidance, reviewing and commenting on Privacy Impact Assessments (PIAs), and offering industry advice on specific initiatives. The goal is to share information and advice with businesses and departments when they are designing their services so that Canadians may enjoy the benefits of innovation without undue risk to their privacy.

The Government Advisory Directorate provides advice and recommendations to federal public sector institutions in relation to specific programs and initiatives, as well as in the review of PIAs and information sharing agreements submitted by departments and agencies. This group also undertakes various outreach initiatives with the federal public sector in order to encourage compliance with the PA.

The Business Advisory Directorate provides advice to businesses subject to PIPEDA in the context of advisory services for new programs and initiatives, reviews for existing privacy practices and proactive engagements with the business community. This group also undertakes various outreach initiatives with the private sector in order to encourage compliance with PIPEDA.

The Technology Analysis Directorate identifies and analyzes technological trends and developments in electronic platforms and digital media; conducts research to assess the impact of technology on the protection of personal information in the digital world and provides strategic analysis and guidance on complex, varied and sensitive technological issues involving government and commercial systems that store personal information.

The Communications Directorate focuses on providing strategic advice and support for the planning and execution of public education and communications activities. Activities relate to the production and dissemination of information for Canadians and organizations aimed at increasing awareness of privacy rights and obligations through, for example, media monitoring and analysis, public opinion polling, media relations, publications, special events, various outreach campaigns and the OPC web site. The Directorate is also responsible for responding to requests for information from the public and organizations regarding privacy rights and responsibilities through the OPC’s Information Centre.

The Legal Services Directorate reports directly to the Privacy Commissioner. The Directorate provides legal advice in relation to PIPEDA and PA investigations and audits, and in support of other operational activities across the OPC. It represents the OPC in litigation matters before the courts and in negotiations with other parties. The Directorate also includes OPC’s Access to Information and Privacy Program. 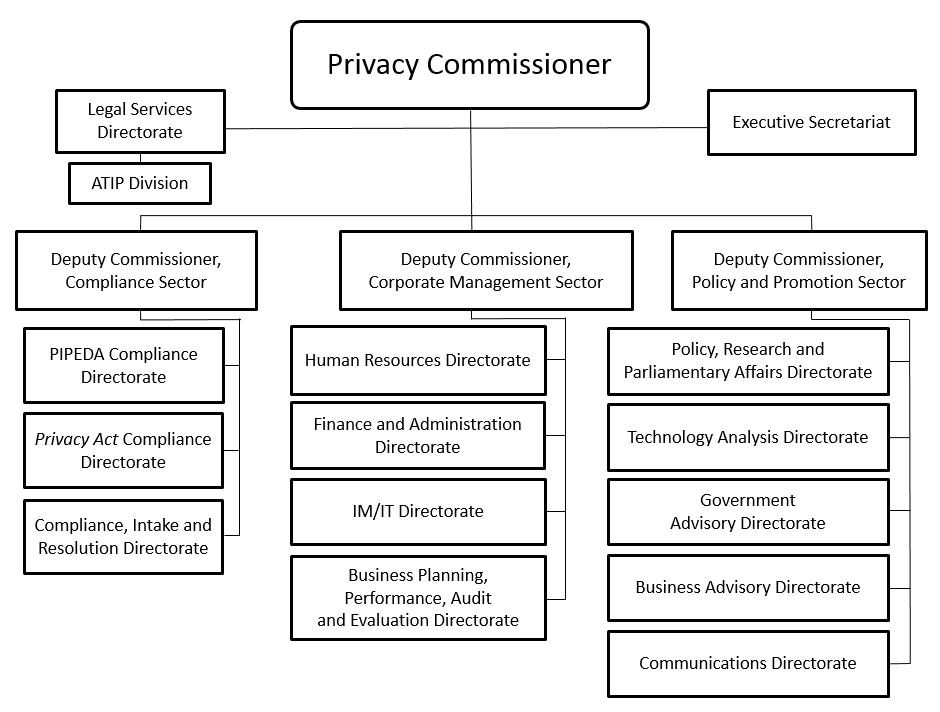 The ATIP Directorate is headed by a Director who is supported by one senior analyst. Another analyst joined the Directorate temporarily in 2018.

Given the silence of the Federal Accountability Act with respect to an independent mechanism under which PA complaints against the OPC would be investigated, the Office has developed an alternative mechanism to investigate OPC actions with respect to its administration of the Act.

For this purpose, the Commissioner’s powers, duties and functions as set out in sections 29 through 35 and section 42 of the Act have been delegated to a Privacy Commissioner, Ad Hoc in order to investigate PA complaints lodged against the OPC.

In 2018-2019, the Privacy Commissioner, Ad Hoc was Anne Bertrand (QC). Ms. Bertrand was the Province of New Brunswick’s first Access to Information and Privacy Commissioner from 2010 to 2017. In 2016, she also served as the Acting Conflict of Interest Commissioner for one year. She was previously a lawyer in Fredericton for over 24 years, working in multiple of areas of the law, including administrative law, criminal law, labour law and civil litigation. She served as an arbitrator on various administrative tribunals for a number of years.

In the reporting fiscal year, four ATIP training sessions were offered to 45 OPC employees, including new employees and those returning from extended leave or temporary assignments elsewhere.

The ATIP Director serves as chair of the Privacy Accountability Working Group. This group comprises representatives from OPC directorates. Its purpose and key activities are to: 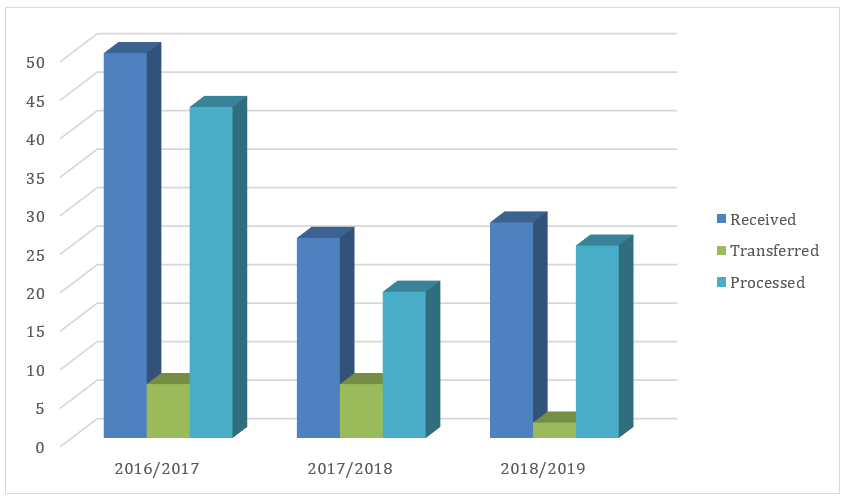 In one case, the OPC was required to claim an extension of the time limit, as the volume of records that required processing was quite large, and finalizing that request within the original 30-day timeframe would have unreasonably interfered with the operations of the OPC. With respect to the 25 requests processed in 2018–2019:

Of the 25 requests processed in the reporting year, 8 were for the contents of PA or PIPEDA investigation files and/or content processed by our directorate. Section 22.1 of the PA prohibits the OPC from releasing information it obtained during the course of its investigations or audits even after the matter and all related proceedings have been concluded. However, the OPC cannot refuse to disclose information it created during the course of an investigation or audit, once they and any related proceedings are completed — and subject to any applicable exemptions. This exemption was applied in 5 cases during the reporting period. With respect to other exemptions, section 26 was invoked in 9 cases and section 12 (information about an individual other than the individual who made the request) in 4 cases.

At no point during the reporting period were requests received for correction of personal information held within the OPC.

Lastly, the OPC was consulted four times by four federal institutions: the Civilian Review and Complaints Commission for the RCMP, the Canadian Security Intelligence Service, the Royal Canadian Mounted Police and Fisheries and Oceans Canada. All of the requests related to OPC investigations.

The Directive on Privacy Impact Assessment, which came into effect on April 1, 2010, requires that TBS monitor compliance with the Directive. Given this responsibility, institutions are asked to include pertinent statistics in their annual reports on the administration of the PA.

No privacy impact assessments were conducted during this reporting period.

The OPC did not undertake any personal data sharing activities this reporting year.

No material privacy breaches occurred within the OPC during this fiscal reporting year.

No work concerning privacy-related policy instruments was undertaken during the fiscal reporting period covered by this report.

Additional copies of this report may be obtained from:

Name of institution: Office of the Privacy Commissioner of Canada

2.5.2 Relevant pages processed and disclosed by size of requests

2.6.1 Reasons for not meeting statutory deadline

2.6.2 Number of days past deadline

Part 4 - Requests for correction of personal information and notations

5.1 Reasons for extensions and disposition of requests

Part 6 — Consultations received from other institutions and organizations

6.1 Consultations received from other Government of Canada institutions and other organizations

6.2 Recommendations and completion time for consultations received from other Government of Canada institutions

6.3 Recommendations and completion time for consultations received from other organizations